It can often be the case that what separates good art from great art is a sense of depth to the image.  You can be the finest figure sketcher in the world, and have amazing ink work with glorious colour but if someone else comes along with all your skills and still manages to produce art that has a certain something extra, chances are they’re shading.  It adds a feeling of tangibility to the image, and also makes it look more natural.

The amount of time an artist spends on shading need not make the artwork unwieldly and draw out the creative process to the point where sitting down to produce the next episode is akin to pulling teeth.  Yes, shading can be a long-winded process but it doesn’t have to be.  There is a simple way to do it.

Seeing in three dimensions
The first stage in good shading is not shading at all, it’s visualisation.  When inking and colouring it can be easy to forget that you’re working on what is supposed to be a depiction of a three-dimensional space.  The image can become nothing more than a series of lines interspersed with splashes of colour and that’s fine as far as drawing and colouring are concerned, but if you try to shade an image when thinking of it as a two-dimensional shape, you’re going to run into problems. 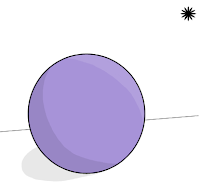 Take a sphere, for example.  Seen in two-dimensional terms, a sphere is simply a circle.  Its surface is flat, and light will hit it at the same intensity at every point across its surface (assuming that the circle is directly facing the light, of course).  Not so with a sphere; some points will be closer to the light than others.  It will have light and dark patches.

Now let’s put a cube into the image, between the light and our circle/sphere.  A cube is nothing more than a collection of flat surfaces but, again, some of those surfaces will be closer to the light, some further away.  Some may not get any light at all, depending on the kind of light we are using (point lights, sunlight, etc.).

But what will the circle/sphere look like now there’s a cube between it and the light?  Assuming the cube is oriented so it faces the light dead-on, it will be casting a square of shade behind it.  The area of this square will grow larger and larger the further away from the square we get, although the intensity of the shade will also fall off exponentially.  This is only really of note when looking at extreme distances however, so for now we will simply think of the circle/sphere being reasonably close behind the cube. 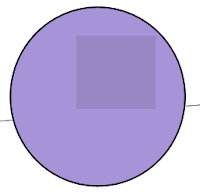 When looking at the circle, we will see a mostly uniform light level and a square patch of shade.  Fair enough, you might say.  On its own, this does not mean much (and the image to the left no doubt shows that it looks a bit stupid) but when the circle is a wall and the cube is your main character, suddenly you have something that enchances your comic: a realistic shadow.

Once you know where the primary light source is, you can begin to imagine the shape of each object in the scene and how it interacts with everything else.  Like the cube and the sphere in the example above, light will hit the surface of the object in a certain way depending on its shape, and it will cast shadows on the other objects around it based on the direction of the light.  This is why it is important to think of the objects as three-dimensional.  If they were two-dimensional, the light would just hit everything at a uniform intensity; like it did our blue circle, above.

Creating a simple shading effect
Now we know the way our objects are going to be shaded, we need to discuss how to actually shade them.  It is important not to risk ruining the artwork produced so far when, inevitably, a slip of the pen happens; or we decide that actually we’d prefer the light to come from a different angle.  Shading should therefore be done on a separate layer to the inking and the colouring.  This will have the further advantage that we can use opacity levels to change the intensity of the shadows.

Create a new layer and set it to an initial opacity of 9%.  This will give a reasonably deep shadow when shading.  Now set your ink to black and, with the pencil or brush tool (whichever you prefer), draw a rough outline of the area to be shaded.  If it’s a large area, bucket fill can be used to fill it, or you may prefer to simply paint in the missing parts by hand.  Because the shading is on a separate layer, any mistakes can be erased without damaging the artwork underneath.

Once the shading is done, it’s time to look at where the light is most intense.  Areas catching the most light will be lighter in colour than areas catching less light.  These highlighed areas are the opposite of shadows and need a separate layer all to themselves.

Again, this gives the advantage of being able to correct mistakes without damaging the rest of the artwork but it also gives a nifty little feature whereby crossing a line of highlighting with a line of shading will not produce the original colour; so intermediate shading can be achieved without extra fiddling around.

Create a new layer and set it to an initial opacity of 12%.  This will give a reasonably highlighted area when using white ink.  As with the shading, simply outline the highlighted area and then either bucket fill or fill in the middle by hand, whichever you prefer.  If you’re wondering why this layer needs to be more opaque than the shading layer, it’s simply a matter of white being harder to see than black; so we need more of it to get the right effect.

Now your shading is complete, experiment with opacity levels to get the right level of shading and highlighting for your image.  Every artist will have their favourite default amount, so see what works for you.  For other effects, try using different colours for the shading and highlighting, rather than just black and white.  Lighter and darker shades of whatever colour your characters and objects are can give excellent results, for example.